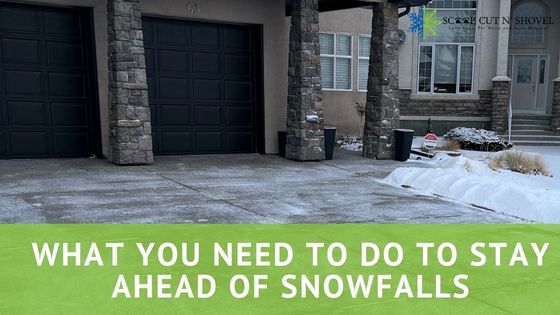 The snow in Calgary always catches the city’s residents off guard the first time it happens. For sure, everyone feels the temperature dropping and knows that it’s coming up to snow season, but we always forget to prepare adequately for that first big snow. The hard part about winter in Calgary, however, is that once you’ve fallen behind on your snow clearing, it can be almost impossible to catch back up. You can find yourself wishing for the annual thaw for months as you watch the snow and ice make a mess of your yard and driveway. Fortunately, it’s possible to stay ahead of the snowfalls, and even catch up on your snow clearing with some professional help along the way.

Staying Ahead Of The Game

The first step that anyone attempting snow removal in Calgary is to keep yourself updated on upcoming storms. Forewarned is forearmed, as the saying goes, and you can take active measures before the snow even hits the ground to make your snow clean up job go quicker:

It’s a nice dream to have that you can avoid snow shovelling entirely, but in reality, you’re going to be out there cleaning up after every storm (unless you’ve signed up for our professional ice removal services!). Just like the steps you’ll take when you know a storm is coming to reduce your workload, you’ll also want to have a plan for how to manage the snow once it’s on the ground.

The key play here is to plan on lots of smaller clear ups rather than waiting for the entire storm to be over before you start your snow removal in Calgary. Once you know the rough timing of the storm and how many centimetres are likely to fall each hour, you can map out when you want to go out and clear the driveways and sidewalks. Yes, this will mean that you’re out in the snowstorm, but fresh snow is considerably lighter and easier to move around than snow that has had the  opportunity to stick together and freeze to hard surfaces. Be sure to spread the snow as evenly as possible, and if you’re making new snow banks, put them in places that usually get plenty of sun (or where you don’t mind having snow in the spring!).

Of course, it’s not always possible to be proactive with Calgary snowfalls. There are those times when the amount of snow is way more than the weather forecasts predicted, and there’s also the possibility of a cold rain shower turning to ice unexpectedly in the middle of the night. At that point, you’re playing catch up with your snow removal in Calgary.

It’s important to react quickly to these unexpected events (or when you’ve just let snow removal get away from you). You’ll need a variety of tools, including an ice breaker for your sidewalk snow removal, and a hard handled shovel that will allow you to break up heavy clumps of snow. You’ll want some ice melt for your driveway that will help reduce the amount of ice bashing and cracking that you’ll need to do. It’s clear to see however, that it’s always worth staying ahead of the snowstorms throughout the winter

If you’ve let the snow build up one too many times, or you just don’t have the time to keep your property ready for the next snowfall, it’s time to get some professional help. Here at Scoop Cut N Shovel, we have a range of worry free snow removal options to take the stress out of your winter.

Each of our subscription packages last for 6 months (which always feels depressing when you book our services in summer!) and entitles you to daily snow clearings and sidewalks ice removal services. The amount you pay will depend on the size of your driveway and the amount of sidewalk you want us to clear. If you’re not sure, just give us a call and we’ll give you an idea. Finally, to save even more money, bundle the best snow removal Calgary has to offer with our other year round property maintenance services, including spring and fall cleanups, dog waste removal and summer lawn maintenance.

An Offer Just for You!
Year Round Property Maintenance Program
One flat monthly rate all year long!